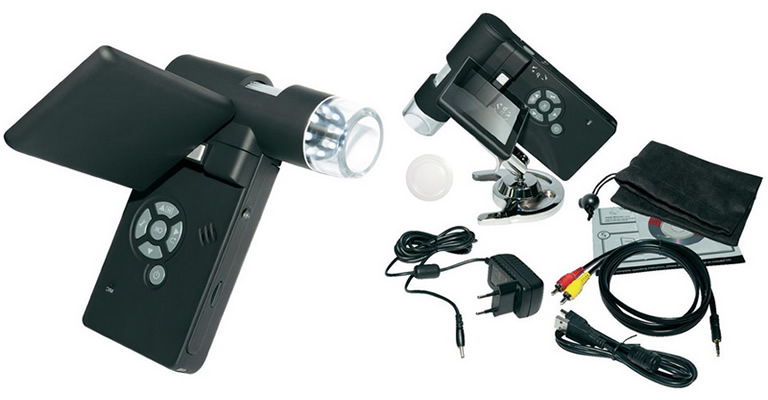 TrichoScope PDM is the best solution when a portable and mobile, but still offering high enough image quality visualization equipment, allowing to obtain diagnostic images even without connection to computer, while with substantially lower budget is of primary consideration.

The system is based on quite miniature, lightweight and convenient Portable Digital Microscope of about a smartphone size for a handy diagnosis environment and offers several levels of magnification while employing the single magnifying lens application. Thanks to its built-in 7.62-mm (3") TFT color display and a 3.7V rechargeable Li-Ion battery, the TrichoScope can be used independently of a PC for up to 4 hours of non-stop operation on a single charge, thus allowing for fully independent operation and complete mobility. Like a conventional digital camera, this TrichoScope can place and store images and videos directly on its MicroSD memory card for further file transfer to PC via the USB 2.0 connection. Equipped with 8 white LEDs, the built-in 5 million pixel camera (12 megapixels interpolated) delivers crisp and clear images, which details can be enlarged directly on its color monitor by digital zoom  up to x500 magnification level. While main advantage of this device is in using it just as a portable microsopic camera independently from PC and saving images to the memory card.

Although, for clear scalp and hair images, either during independent operation on its own, or while being connected and transmitting diagnostic images directly to PC, there are two set lower at x40 and higher at x175 magnification levels, applicable for obtaining a most accurate diagnostic results.

TrichoScope PDM offers several magnification levels with a single lense application. General magnification levels range from as low as x10 and as high as x500 (by zoom-out and zoom-in functions), while using it just as a portable microsopic camera independently from PC and saving images to the memory card. However, for clear scalp and hair images, either during such independent operation, or while being connected and transmitting diagnostic images directly to PC, there are certain set two magnifiation levels, lower at x40 and higher at x175, applicable to obtain most accurate diagnostic results. The specific set magnification values within these ranges entirely depend on a target of study individual properties and can be easily adjusted as well as custom accepted by TrichoSciencePro © software. 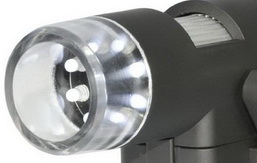